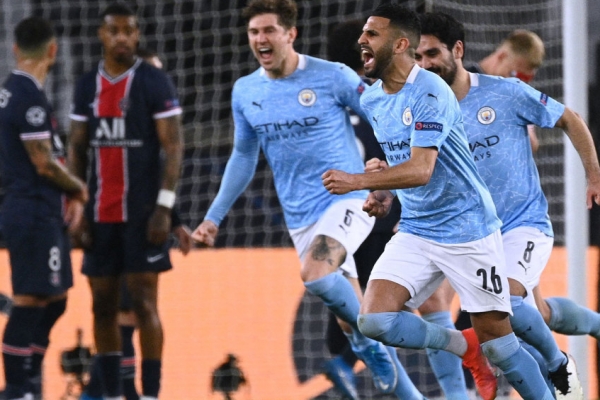 Manchester City revenged Paris Saint-Germain for the loss at Parc des Princes in September, beating Parisians 2-1 at Etihad Stadium. With this success, which was fully deserved, the Joseph Guardiola team secured first place in Group C, while PSG will certainly finish in second place. The English champions had complete dominance in the first half, but failed to take the lead. Instead, Killian Mbappe opened the scoring in the 50th minute. Manchester City was not startled and managed to reach a complete turnaround after goals from Raheem Sterling and Gabriel Jesus.

Messi, Neymar and Mbappe started in the atomic attack of PSG. Sergio Ramos, who for the first time got into Pochettino’s group today could record his first minutes since May, stayed on the bench for the beginning and never made his debut. Keylor Navas started at the goal, while Herrera and Paredes acted as inside midfielders.

The Citizens totally dominated PSG in the first half, but failed to realize their advantage, as happened in the first game at “Park des Princes”. PSG had a hard time passing the ball and rarely found ways to involve the attacking trio as the overcoming City pressure was very successful when a chance to control the ball was present to PSG midfield.

Despite a lot of difficulties in the first half, PSG again showed good efficiency and in the 50th minute came out ahead. Neymar and Messi played off each other well and the Argentine’s cross after bounced luckily into a City defender and found the way to Mbappe, whose shot went between Ederson’s legs.

In the 63rd minute City equalized. Rodri found Walker on the wing, who crossed in the penalty area, where Jesus passed to Sterling on the far post for 1-1. In the 73rd minute, Neymar missed a great chance for a second goal after being left alone against Ederson, but shot inches wide. The Citizens punished this in the 76th minute, when after a very good attack Riyad Mahrez crossed to the far post, where Bernardo Silva decided instead to shoot, to make a very soft pass to Jesus, who shot in the far corner for 2-1.

After this win the Citizens already have 12 points, while the Parisians have 8. RB Leipzig and Brugge have four and in the last round they will fight over who will play in the Europa League in the spring. The German team will host City while the Belgians visit PSG.